Carrying on with the love theme, today I have a card to show you using another image from Drawn With Character which is called Bee Mine.
I decided that as the image was of bees I would use my Spellbinders nesting Hexagon dies to make a honeycomb effect with patterned papers on a honeycomb shaped card base. I went into my craft room to look for the dies, brought them downstairs so that I could scan them into Photoshop (I like to lay my card out in Photoshop and re-size papers etc., so that the patterns aren't too big for the shapes), I opened the packet grabbed the first die and then realised that I was a total idiot! they weren't hexagons at all, they were octagons LOL! and totally unsuitable for a honeycomb.

I still wanted to use the honeycomb layout so ended up cutting the shapes out by hand.
I also liked the idea of adding a love themed charm to the card but somehow or other ended up with 5 of them, dangling across the card like bunting, (I couldn't decide which one looked best, so decided to use them all, well you know what they say - less is more, but even more is even better hehe!). I also added a small piece of feather to the end of the arrow that is piercing the heart. 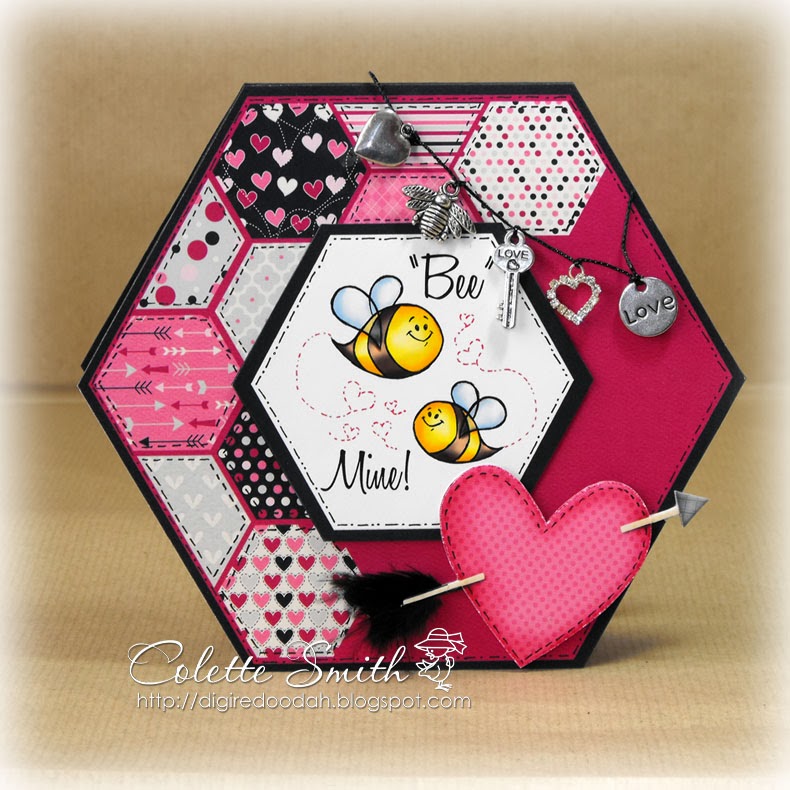 Thanks for visiting,
hugs,
Colette xx

Sweet Colette. ....you make the most lovely cards. Love this ♥

Bee-rilliant! Love the card design and all the little details you have added - Gorgeous!

Love the colors and the sweet little bee!! :):)

MY Word! How awesomely creative! Love it.

Hi Colette, a gorgeous card. Love it all including all the charms!