Today my grandson Will is celebrating his eighth birthday, he had ten of his friends over to my house yesterday to play in the garden, thankfully I was out at the Manchester Craft show for most of the time, I only made it home for the last half hour (accidently on purpose LOL!). It wasn't really a party, no party food or anything, but his mum went to the chippy and bought lots of bags of chips and sausages (one of the things on his birthday present list was a chippy meal) which the kids loved.
My hubby built Will a tree house a couple of years ago and then added a rope climbing frame to it last year, we also have a 10ft trampoline, a swing set and a small slide so there was plenty of things to play on, even before the bouncy castle turned up.

I think I told you in a previous post that he is shark mad and the gorier the shark the better, so I thought I would show you a pic of  his birthday cake which has a shark's head bursting through the water with a mouthful of body parts. 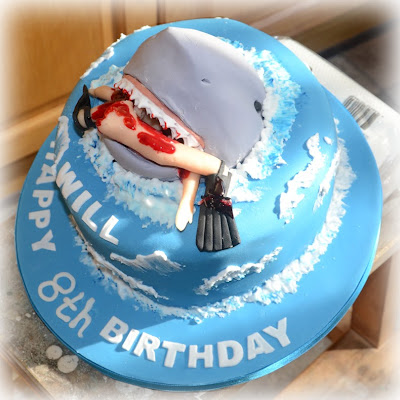 I love the body parts, particularly the legs with the flippers on.
(Please excuse the messy paint stained stool we stood it on to take a picture from above, the rest of my house doesn't look like that honestly! LOL!)

Of course I had to make him a couple of Shark themed birthday cards, one from my younger daughter Meg and one from hubby and I.

This is the one from Meg 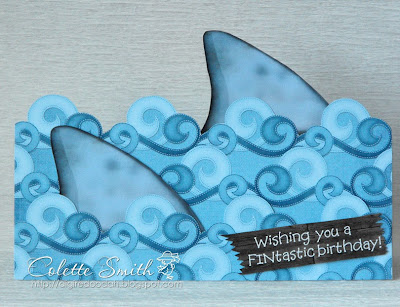 I made the shark fins in Photoshop
Water and wood panel for sentiment are papers from YoHo digital scrap kit by Just so Scrappy
Wording is computer generated.
I made a tent card, fixed the higher fin in place and then covered the front with a piece of the wave paper after cutting it out along a row of waves, I then added the lower fin using foam pads and another layer of wave paper again with foam pads before fixing the sentiment in place. 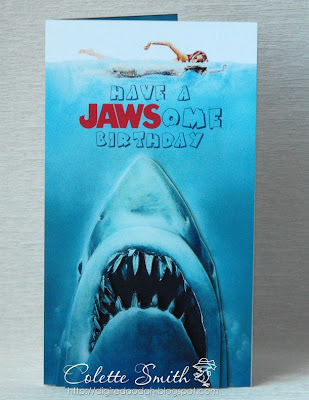 I found the image on Google, re-sized it in Photoshop and then printed it out a couple of times,so that I could layer up the shark, his mouth and teeth, doesn't show up too well in pic but looks really effective in real life. 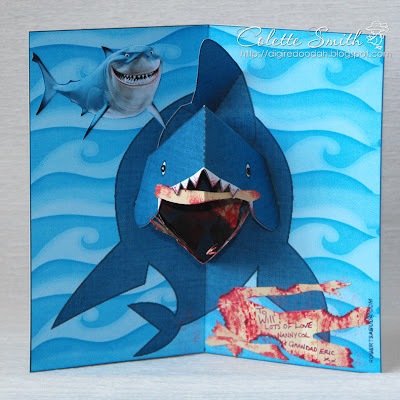 The pop up shark on the inside was made using a free template and instructions I found HERE, the background paper is from  Pool Party digital scrap kit again by Just So Scrappy, I cut the body using an old sizzix die, although you are supposed to then die cut clothes for it, not feed it to the sharks hehe! 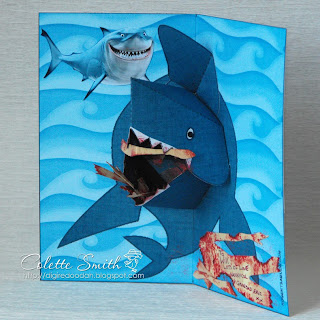 I added Bruce from finding Nemo, just for a bit of extra detail.

He is off to the Sealife centre today to see the Sharks (what else LOL!)

Thanks for stopping by,
Enjoy the rest of the weekend,
hugs,
Colette xx

Amazing cake!!! But the cards - wow!!!!!! They are all brilliant, your imagination is amazing (that word again), but to actually then bring your creations to life is fantastic. Wow!
Hope Will enjoys his day out and doesn't feed Charlie to the sharks!?! (more likely the other way round ha ha!) Brilliant - you are a extremely talented woman. xx