Birthday bakes and a dragon

Both of my grandsons had birthdays while I was away from the blog and I had the task pleasure of making them each a birthday cake. When I asked Will what he would like he said Hyperspace Mountain!!! (they had just come home from Disneyland Paris at the time), well there was no way I could reproduce that, luckily he eventually decided that he wanted something with a pig (his favourite animal), so I made him a pig in mud cake, which didn't stretch my limited skills too much. 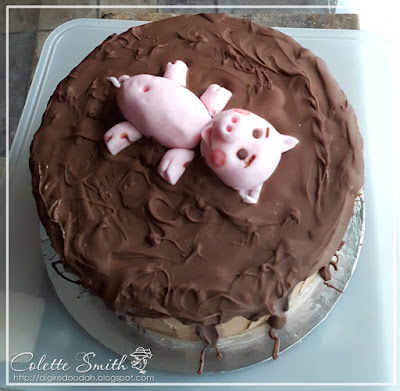 The "mud" is a whole giant bar of Cadbury's Dairy Milk, melted and poured over the top, the cake has three layers and is sandwiched together and coated with chocolate buttercream again made using lots of Dairy Milk, can you guess what his favourite chocolate is? LOL!
I have to admit by the time it was done, the sight and smell of chocolate made me feel nauseous, unfortunately that didn't last long, hehe!

Charlie wanted Ben Ten and in his words "lots of chocolate like Will's please", so after sandwiching the cake together with vanilla buttercream I covered it in Dairy Milk chocolate buttercream icing, coated the sides with crushed Cadbury's flakes, covered the top with a personalised icing topper ordered from eBay and then after piping buttercream swirls around the top and bottom I added giant chocolate buttons to the base 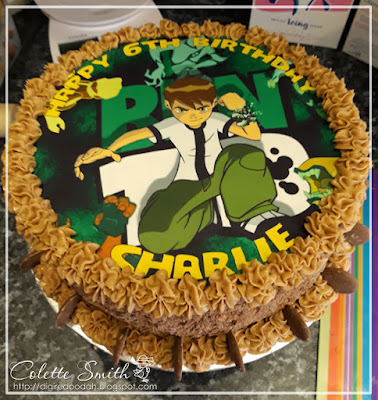 Eric and I also made the boys a chocolate bouquet each, Eric drew up a template and then cut out the boxes, I put them together and then we arranged all their favourite sweets and chocolates in them. I don't have a photo of Charlies as I forgot to take one, but his was red and had lots of Aero peppermint mint bubbles in it. 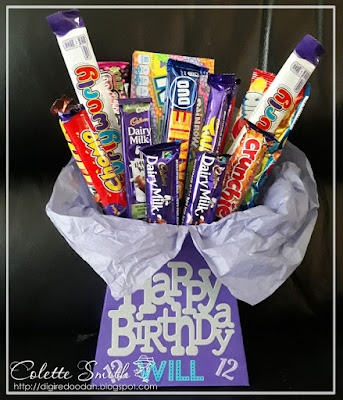 We also got to help Will with a school art project. They had to make a mythological creature, he wanted to do a dragon with flames coming out of his mouth! We compromised with light up eyes and nostrils LOL!
Eric could the main part of the body from stiff corrugated card, it was a bit too fiddly for Will, but he cut all the other bits, he also helped Eric build the circuit for the lights and did most of the soldering after being shown what to do (that was his favourite part), once the model was finished he came to me for decorating. We covered the old box we used for the base with crumpled up tissue paper and tacky glue, then once dry he dabbed browns, blacks and greys all over it. He gave the Dragon a base coat of a creamy yellow colour before sponging on the orangey/red paint that he wanted to use, and once that was dry he rubbed some gold gilding wax into it. 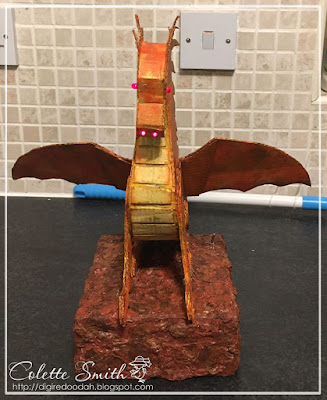 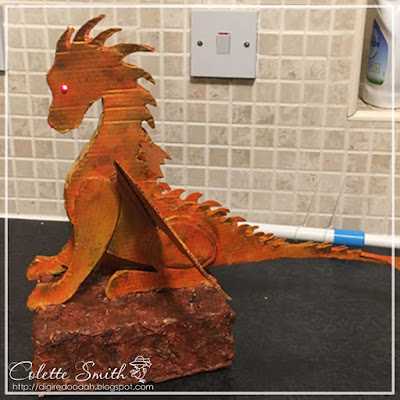 The teacher was thrilled with it and has put photos up on the school website as well as putting the dragon on display.

Well that's it. I've just about caught up with everything I've been doing over the last couple of months while away from the blog, it's taken a while, but there was a lot to show, hope I haven't bored you too much.

토토사이트 Extremely intriguing online journal. A lot of web journals I see nowadays don't generally give anything that I'm keen on, however I'm most definitely inspired by this one. Recently felt that I would post and let you know.

this is exciting, nevertheless it is vital for you to visit this specific url: 스포츠토토티비