A while ago I mentioned that my friend Julie had rung me up and asked me if I wanted to go the theatre with her and her daughter to see the Dreamboys, and somehow my befuddled brain translated that to Dreamboats, I thought she meant the musical Dreamboats and Petticoats, which I have always wanted to go and see, so I immediately said yes. It was only when talking to my daughter about it a couple of months later, and telling her that Julie must have got mixed up because I was sure she had called it Dreamboys, that I found out that I was going to see a male dancing/stripping group!!! so instead of a show full of net petticoats, rock n roll and jiving, it's going to be a show full of men, muscles and gyrating hehe!
Well the show is tomorrow night and I'm going to have to go - I've already paid for the ticket and it would be a shame for it to go to waste , don't ya think? LOL!

Before then I have a Teddy Bea card to show you. 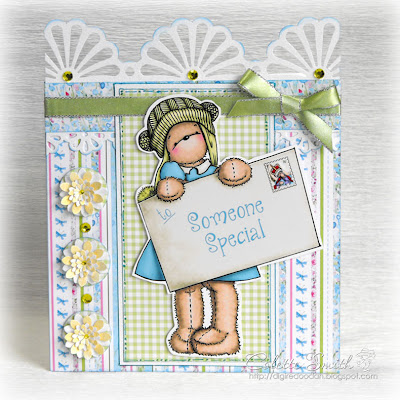 Thanks for popping in,
hugs,
Colette xx

This is so sweet Colette. Love the sweet image and the papers and design are gorgeous.
Hugs Sharon x

This is just adorable! I love this card..:)

I have just downloaded iStripper, and now I enjoy having the best virtual strippers on my desktop.