Clipart Fairy Grin and Bear it1

A bit late but finally here, I have been struggling all day to get this done, but have so much going on that it's taken me a while.

Did you see Will's Egguarium a few posts back, well I'm pleased to report that he came first in the egg decorating competition and is chuffed to bits with his prize of a Thornton's egg, which his mum has put away until Easter, he's promised me a little nibble as I helped him, isn't he kind LOL!

My mum will be celebrating her 70th birthday on Thursday, unfortunately my aunt (step-dad's sister) passed away last week and her funeral is on the same day as my mum's birthday, so it has put a bit of a downer on it for her.


Hopefully her pressie will cheer her up a bit, I've bought her a Kindle as she loves to read, I just need to get a few books loaded up on it for her now.

For her birthday card I decided to use the Clipart Fairy's Grin and Bear it Shaper kit.
I resized the shaper to make an eight inch square card. 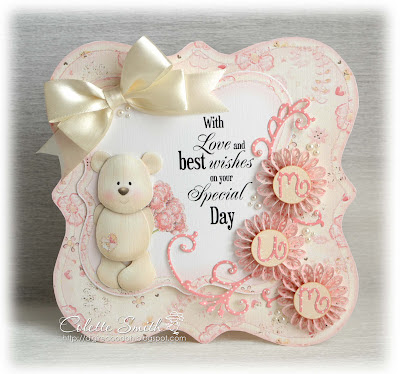 I printed the shaper section out twice, cut around both pieces and then scored in about 2.5cms from the left hand edge of one. I used double sided tape to stick the scored section to the back of the second shaper, matching up the edges, to make my card base. The shaper topper I printed quite a bit smaller as I wanted to attach it to the left had side of the card and leave some space down the right hand side for my rosettes.
I used some papers from Nitwits Grin and Bear it Kit for the swirls, letters and to make the rosettes, punching a scalloped edge first before folding and making up. 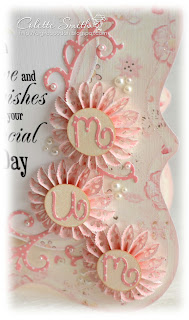 I hope she likes it and manages to enjoy her birthday even with the funeral.

Such a gorgeous card, hope the day goes ok for you all.....

Åhhh that is just one cute card!! Lovely! =)

Very pretty card, love the rosettes. Sorry to hear about your Aunt, I am sure your Mum will love your card.
Congratulations Will!