Before I give you the details about this weeks Teddy Bo challenge I thought I would tell you a little tale about my grandson Will.

Eric saves all his two and one pence pieces, as he used them in the coffee machine in work. The coffee machine no longer takes these smaller coins and hasn't done for quite a while, so on Friday he brought a huge bag of them home from work and gave them to Will. Will took one look then told his mum he had about £100, then decided it was £1000, it was actually just under £10 ( remind me never to let him guess how many jelly beans are in the jar at the local school fete LOL!) I asked him what he was going to spend his money on, expecting a reply of either sweets or toys, but to my surprise he said he was going to use it to buy his tea from the chippy!!!
He called in again after school today and we were talking about Christmas and presents, my daughter Stacy (his mum) was saying that he only wants one thing for Christmas and that's a game for his DS, we told him he needed to try and think of a few other things to add to his list. Suddenly, he jumped up and told us he had thought of one other thing he would really like Santa to bring him, yes! I thought, problem solved, this was something I could buy him, until he said he wanted....................... a meal from the chippy LOL!
Either his mum is the world's worst cook or he is addicted to sausages and rice from the chippy, that's the funny thing, he doesn't even want chips, just sausages and boiled rice!!! A very strange little boy indeed
May have to check out the local chip-shop and see if they do gift vouchers LOL!
Anyway enough rambling from me, the new challenge over at Teddy Bo this week is...
My Favourite Colours
have you guessed what mine are yet... if you are saying turquoise and lilac then
give yourself a pat on the back! 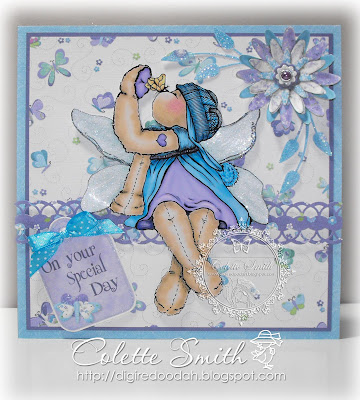 I have used TEDDYBEA_151 "Pretty Butterfly" she's just so adorable and I knew she would look fabulous dressed in my favourite colours Turquoise and Lilac.
I coloured her in Photoshop and made a Mahoosive! 21cm square card.
All papers are from Nitwits Promises Collection. The tag and flower also come from the kit.
Bea is sitting on a border made using Martha Stewart's Layered arches punch.
Pearl brad is from Hobby House.
Ribbon is from MeiFlower.
Leaves are from CREAlies die CL CS11.
There is lots and lots and lots of glamour dust too. 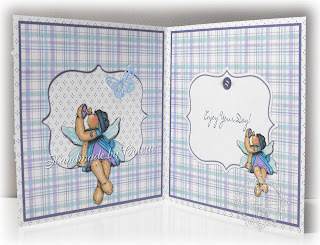 Inside is decorated too, again using papers from the Promises Collection and a Martha Stewart punched butterfly.

Pop over to the Teddy Bo challenge blog and check out all the fabulous inspiration from the rest of my teamies, including our four newest members, Tammy Louise, Maritha, Laura and Hazel.
Whats New in store this week!?!?!

You have until Sunday 16th October Midnight (GMT) to get your entries in, and you could be in with the chance of winning 10 fabulous Teddy Bo digi images.
I am entering this card into the following challenges.
Craft Your Passion - Anything Goes (plus Ribbons)
Crafty Cardmakers -  Anything Goes
Digi Makeover Challenge -must use digi - Colours Inspiration
Make it Monday - always Anything Goes
Cutie Pie Challenge -Bingo* Glitter, Lilac, ribbon or lace, although I could also go across the middle from left to right or top to bottom LOL!
One Stitch At A Time - Use a Digi
Sparkles Forum - Something That Sparkles
Posted by Colette at 01:17

Cute, cute card, love the image and the coloring is perfect. TFS

Beautiful coloring - I can't believe you did it in Photoshop and not by hand, it's so perfect! Love the pretty paper too. Thanks for joining the Digi Makeover Challenge at Paper Makeup Stamps! :)

oh this is one super cute image just love the colors on this,the detail is just stunning,loved the story about,the chips,made me smile love cherylxxx

Adorable Colette! Love your teddy bea image and your lovely colours! Thank you for playing with the Cutie Pies! Woo x

Oh you vixens in the Teddy Bo towers are at it again tempting me! Thanks for sharing the story about your grandson, I was right there with him until you said he wanted the sausages and rice. I mean who doesn't like a nice hot bowl of chips! Oh and I have to mention that I saw you on MIM or the MIM fairies might punish me!

HI Collette
Had a titter when I read about your grandson, my daughter lived on plain boiled rice with vinegar for a year, which was hard to ask for when we went to France one year......lol, your card is adorable and you've picked my favourite papers from Nitwits as well......gorgeous
hugs

Goreous, I love the colour too! Thank you for playing at Crafty Cardmakers! xx

Wow, luv this Teddy Boo image, your colours are brilliant together. Thanks for joining us at Cutie Pie, good luck. Cheers Sue xx

This is a really beautiful card! Thank you so much for joining us this week for our "anything goes with a twist" challenge over at Craft Your Passion Challenges. I hope you have a great week and Good luck.

Fabulous card - inside and out. I really like this color combo too. Glad you joined us for the color challenge at the Digi Makeover Challenge this week.

Lol I love that story about Will! When my husbands on late shift Chloe and I always got to the chippy for tea! Its our little secret shhhh don't tell him!!!

Your card is stunning as always Colette, I have never tried those colours together but I think I need to now!

Beautiful Coloring I love your choice of colors!Thank you for Joining us for Anything goes with a Twist at Craft your Passion Challenges. Good Luck and Have a great week:)

OOOH this is just beautiful, inside and out! Thank you for joining us at OSAAT. good luck. Hugs

Absolutely darling! Love how you've done the inside too. And your coloring is beautiful! Thanks for joining us at Digi Makeover challenge!

Fantastic card! Oh my goodness I love the image and the colors are so perfect. :D

Thank you for playing along with us at Make It Monday!
Remember, for a chance to win the prize from our sponsor, leave a comment for another entry and mention that you saw them on Make It Monday.
Lisa xx

Turquoise & Lilac - what a surprise!? Looks fab - your cards are always so bright and colourful and gorgeous. Karen :-)

such a cute card, fab colour combo. thanks for playing along at the Cutie Pies. Hugs LIsa x

stunning card, lovely image and coloured beautifully
Saw it over at MIM
http://janetscraftycreations.blogspot.com/

Beautiful card. I love how you put those colors together. Thanks for taking the Digi Makeover Challenge at PMS.
Melissa

I love these little bears! Great job! Thanks for playing at PMS this week. :)

So cute.. this is adorable...
thanks for playing with us a DIGI Makeover at PMS...

That is such a great story and one you can tell his children. I think your joke idea of vouchers for the chippy would be a great present and may well even be the best pressie he gets.
Your card is just beautiful but you can't go wrong with our favourite bears can you? Thanks for joining us in our bingo challenge over at Cutie Pie Challenges,
Hugs
H xx