A bit of this and a bit of that!

Here are a few more of the things I made while I was away from the blog, mostly presents for people.

My friend Tina from the Chix with Stix group, celebrated her 50th birthday in October, but she had a lot going on in her life as her partner wasn't too well and was in hospital the week of her birthday so the Chix decided to make a fuss of her at our Tuesday meet up. We put up banners and brought food and drink along to have a little party. I decided to make a table centrepiece using my Silhouette machine. 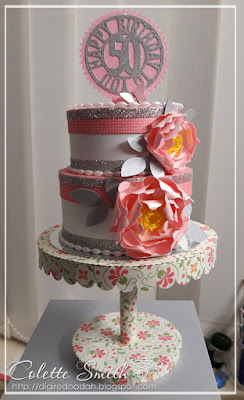 The whole thing including the cake stand is made from paper and card, all cut out with my Silhouette machine and put together with my own fair hands LOL!

Another friend renewed her vows, they had the ceremony in the same place as they were married at Ashton memorial in Williamson Park, Lancaster. She laid on a coach to get us all up there from Huyton and as the place doesn't have any catering facilities she had hired a fish and chip van to feed us all. The weather wasn't brilliant but we had a lovely day and evening. I thought I would make Sue and Ian a box photo frame as a gift, I added a saying to the centre that can be removed and replaced with a photo. 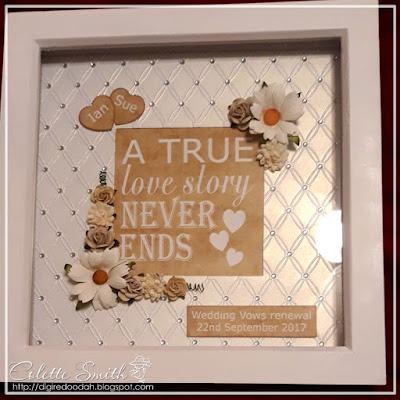 The embossed background was made using Tied Together embossing folder by Couture Creations, I added a tiny Meiflower Ab stick on gems to each of the points where the pattern crossed, and the flowers were out of my stash.

I also made another frame for my daughter Stacy to give to a friend who had just had a baby, 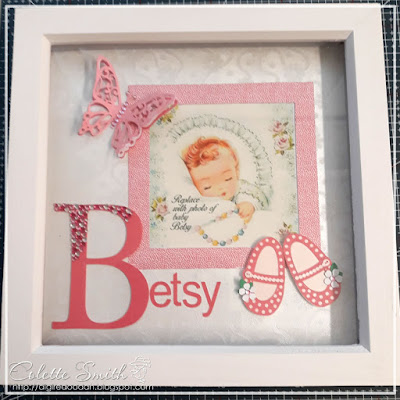 Betsy, the shoes and butterfly were all cut with my Silhouette machine. I decorated the initial letter with lots of Meiflower gems and pearls, and once again added something to the centre that could be removed and replaced with a photo.

Thanks for stopping by,
take care,
hugs,
Colette xx
Posted by Colette at 07:00