This morning I will be up and out very early as my hubby and I are doing our very first car boot sale and we have to be there by 6.30am!!! as it opens at 7.
We  mostly have kids toys and games, as we have been sorting Meg's room out.
People have bought Meg lots of lovely presents over the years, but unfortunately she hasn't been able to use a lot of it, because of her physical limitations. We have boxes that have never been opened, games that have only been opened once to try them, found they were unsuitable and packaged up again, so everything is in immaculate condition.
Not looking forward to the early start, but if nothing else it will be an experience!

Now onto the next two cards, again using the same two kits as the previous two posts.

With the Laptop Toodles kit you get a Make me a Topper kit designed in the hangover style and if you are not sure how to use it check out the Fairy's tutorial HERE . 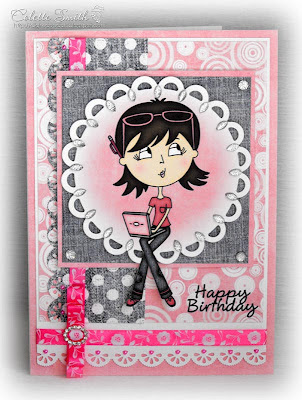 The Letter to Santa kit contains a Shaper set, and I have used it for the easel card below. I added an extra layer to the shapers as I like the contrast between the colours. To do this - after I had re-sized my shapers to fit my design, I copied the top one and re-sized it to fit between the two normal pieces. After I had printed and cut around it I used it as a template and drew around it with a pencil onto the reverse of a piece of patterned paper from the kit, cut around the pencil lines and I had my contrasting layer. I also had the topper that I had used as a template printed out and ready to use to make another card! 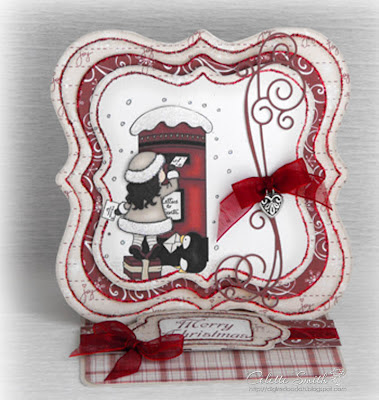 Very nice cards, like the ribbon on the first card.