A couple of weeks ago we had some devastating news when we found out my 82 year old Father-in-law has cancer, after going backward and forward to doctors and hospitals for weeks because he was in a lot of pain and being told it was just an existing condition (he has polymyalgia) and him insisting it was more than that, they finally did a body scan which showed up shadows on his liver and in his bones. He had a biopsy last week and they are doing a second biopsy this Thursday before they start him on any treatment. Although the cancer is widespread and they have told him they can't cure it, they seem to think it can be managed for now with treatment.
He has just received a rheumatology appointment  through the post for May 2014, which he has taken as a positive sign, laughing that they must think he will still be here by then LOL!

Today I have the last of the cards I made with the Paper Creator Joy Ultimate kit. I made a scalloped rocker, which because of the scallops doesn't actually rock, so I think I need a more suitable name for it LOL! and used the tags in the kit to make a couple of tag shaped cards! 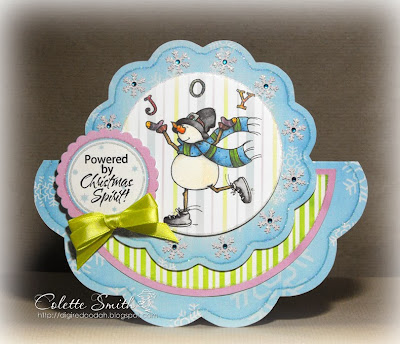 I re-sized the topper base (from the make me a topper set included in the kit) to fit the 8 inch width of an A4 piece of card, then printed it out directly onto Papermill Direct Linen Card, scored through the middle and folded to make a scalloped circle tent card. I re-sized another make me a topper set to fit on to this base and  once again printed it and a couple of paper designs onto more A4 Linen card. I used circle dies to cut out my papers and matted them onto the scallop base, then added the topper and layers with foam pads. The sentiment is also included in the kit. I finished off with lots of glitter, punched snowflakes and ribbon and crystals from Meiflower. 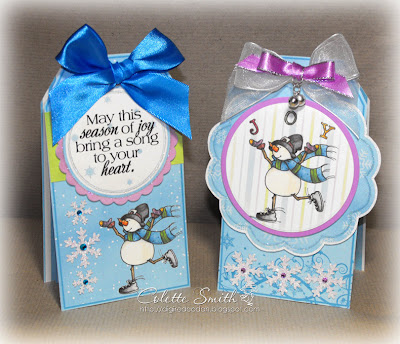 Included in the extras section of the Joy ultimate kit is two tags, one with the snowman and the other with the swirly design across the bottom. I took one of each into my graphics program, rotated one 180 degrees and then lined the two tags up with their tops just touching. I then re-sized the whole thing to fit the long length of an A4 sheet. I copied this to make a second card base as two fitted nicely on one sheet of card. After printing directly onto Papermill Direct linen card, I scored and folded to make two card bases and then printed a sentiment and make me a topper set from the kit and used some off cuts from the previous cards for matting to build up a design on each card front, finishing off once again with punched snowflakes and some ribbons, gems and a couple of jingle bells from Meiflower.

Enjoy what's left of the weekend
see you Tuesday,
hugs,
Colette xx
Posted by Colette at 18:49

Colette - the cards you have been making with with kits and images are really inspiring. Gorgeous colours and ideas.
Sorry about your FIL, good that they look after him now. Thinking of you and the family.
K xx