Whenever I make a card I start out with an idea of how I want it to look and then end up with something totally different. Sometimes it's the layout that changes, other times - as in the card below - it's the colour scheme, but whatever it is, I never end up with the card I had originally planned in my head. 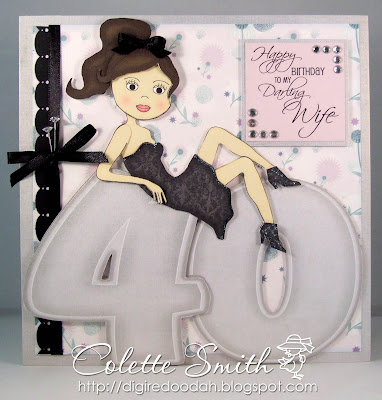 I like to make my card up in Photoshop before I print and cut anything so I can play around with papers and images until I get the design I want (one of the reasons why I love using digital products - no waste!)

I decided to use the Oh No the Big 40 graphics and 30, 40, 50 paper collection by the Clipart Fairy which are pink, but once I had it laid out I wasn't happy with it. I cut out the girl, and then added Jade numbers from the Jade Linen Alphabet set, but once again it didn't look quite right, then I found this very pretty backing paper in The Girls R back in Town paper set, and knew I just had to use it, things were starting to look up, I felt like I was finally getting somewhere, but the Jade numbers were too green for the bluey green flowers in the paper and none of the other Alphabet sets I had were suitable. I popped over to the store and found the new Silver alphabet and numbers set, which I knew would be perfect, and five minutes later it was downloaded and ready to use (another one of the many reasons I love digis LOL!). I printed the silver numbers and backing paper onto pearl card and although the photo's don't show it, in real life they look very silvery. The sentiment on the front came from the female family members birthday wordart set. 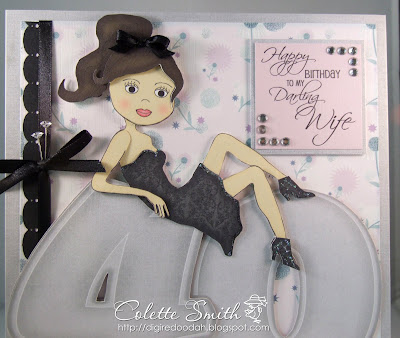 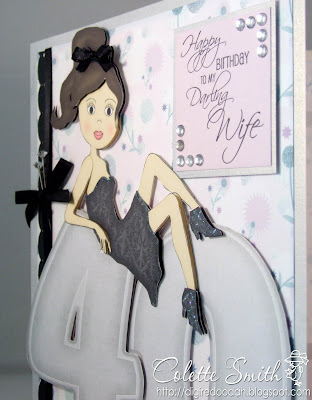 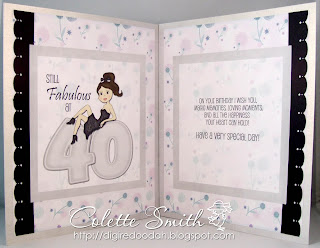 I added a black border made using a Martha Stewart punch, ribbon and gems from stash, a couple of crystal headed pins from Creative Treasures and glamour dust to the dress and boots. The card was made for a friend of a friend's wife, I hope she likes it!

I am going to enter this into the following challenges;

This is gorgeous Colette. The lady is very preety and is a genius idea having her laying across the numbers. tis fabulous!
Thanks for joining in at Glitter Geeks and good luck!
Steph xx

Great card and nice image.... not seen before. Thanks for playing
Love Cynthia x

Well worth all the hard work on this one... it's brilliant! Jo x

Hi Colette,
This is just absolutely Gorgeous!!! Love the image you've used, the dp's, the colour scheme is just fab. Love the layout and the embellishemnts. Thanks for joining us at Glitter Geeks and Good Luck.
Hugs Jacqui xxxxxx

Fab card Colette. Looks just like me (LOL) not!

Brilliant card Colette, and very well thought out! Thanks for joining us at Glitter Geeks and good luck :).