Hi everyone, wanted to wish you all a very happy Easter and thought I would take the opportunity to show you some of my eggs.
In another life I used to make Faberge Style decorated eggs, I even taught night school classes at a local school for a couple of years.  We tended to use mainly goose eggs, but I have also used ostrich, rhea, duck, pigeon and finch eggs. The eggs were always ones that hadn't been fertilised so would never have turned into babies.
The egg above was a double yolker goose egg, these were bigger than normal but the shell was thinner so harder to work with. I used a Dremel drill to cut the opening into the shell, we also had lots of different drill bits for different cuts, the filigree pattern down the side was cut using a flying saucer bit!! After cutting we used a pearl paint that was made for painting pottery and applied several coats (at least six) to get a smooth finish and help strengthen the shell. The inside of the egg was usually coated with a mix of tacky glue and fine glitter, again to help strengthen the shell. The eggs were decorated with lots of ribbons, cords and Swarovski crystals, (so were not cheap to make). The figure inside was also painted by hand, so there was a lot of work involved to make just one egg. The figure in this egg is holding a flower above her head and in the centre of the flower is a little bulb, the wires run through the figure, out through the blow hole in the bottom of the egg, through the stand into the base where the switch and batteries are hidden, so it actually lights up.


Here are a couple of side views of the egg above.

The next egg is a goose egg music box, it is cut in half and hinged at the back, inside the bottom half is the workings of the music box. It is decorated with a technique called paper tole, we used waterslide transfers, coated them a number of times with something called Royal Egg Sheen to make them stiffer and then using several layers cut, shaped and layered them onto the shell, finishing off with more coats of egg sheen. Once finished they look like porcelain flowers. 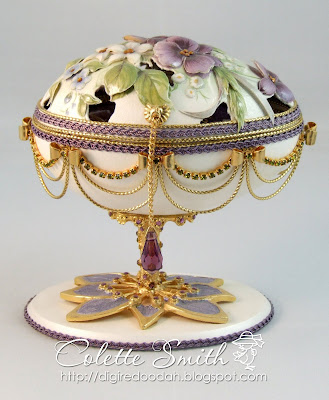 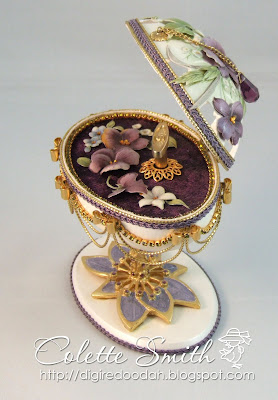 The final egg for today is a swan, made from two goose eggs, a whole one for the body, the wings being cut out of the second one. The swan neck is made of plaster and is attached to the body using epoxy glue, the whole thing is painted with pearl paint and decorated with Swarovski flat back crystals. The wings are attached with hinges so that you can have them open and closed, gold jap cord is glued around the cut edges and then flat back crystals are applied between the cord. 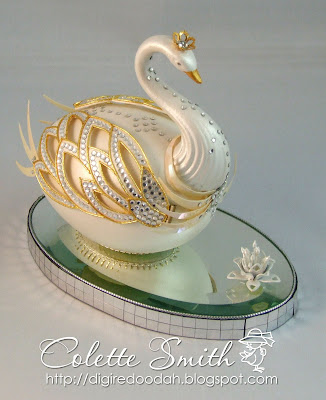 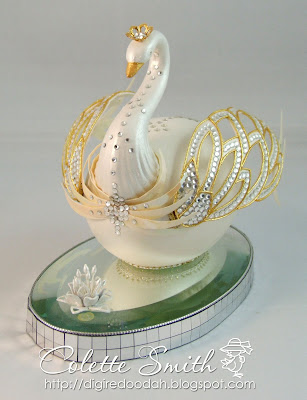 These are just a few of many eggs that I have in a large cabinet, one day  I may show you some more (hmmm is that a promise or a threat! LOL!)

There are many places out there that sell the crystals, cords, ribbon, jewellery findings, I used to get a lot of my stuff from Eggstravaganza, check it out if you would like to see some more examples of how you can decorate an egg.

Not sure if these are going to count, but thought I would enter them in a few challenges anyway.

Wow this are amazing and so precious!!! Just love all of them I can see there was many hours put into these beautiful creations!!

OMG !!! Colette this just blows me away... gorgeous hunny xx

OH My Word!!! These are just gorgeous.

Precious, gorgeous and amazing. Love all of your creations. Thanks for participating at this weeks TG challenge. Bettina

Absolutely stunning, what a fantastic talented lady you are.

Oh wow these are just stunning. Thanks for sharing and playing along with us at Totally Gorjuss.
Hugs Sue x

Wow, Colette! I'm wordless! You HAVE to show us more! They're stunning! Hugs, Miria

OMG! These are fabulous hun! I am totally gobsmacked!!!
Thanks for playing at the Delicious Doodles Challenge this week, good luck with the draw!
Hugs,
Teri x

Colette, so glad you decided to share your egg creations with everyone. I really miss egg decorating, but I can testify to how hard it is, but as with everything you do, you make it look effortless, and everything you do is beautiful. I hope you show more eggs in the future. xx

Wowza, these are beyond gorgeous Colette! amazing work hun!!
Thank you so much for sharing @ Inspire Me Fridays this past week!
hugs!

WOW!!! WOW!!!! I need a minute to pick my chin up off the floor. These are just so amazing! I'm stunned!!! Beautiful! Thanks for playing along with our Sentiments challenge.